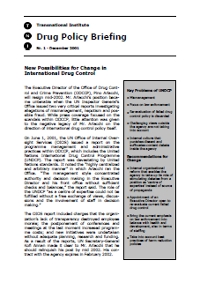 The Executive Director of the Office of Drug Control and Crime Prevention (ODCCP), Pino Arlacchi, will resign mid-2002. Mr. Arlacchi's position became untenable when the UN Inspector General's Office issued two very critical reports investigating allegations of mismanagement, nepotism and possible fraud. While press coverage focused on the scandals within ODCCP, little attention was given to the negative legacy of Mr. Arlacchi on the direction of international drug control policy itself.

On June 1, 2001, the UN Office of Internal Oversight Services (OIOS) issued a report on the programme management and administrative practices within ODCCP, which includes the United Nations International Drug Control Programme (UNDCP). The report was devastating by United Nations standards. It noted the "highly centralized and arbitrary manner" in which Arlacchi ran the Office. "The management style concentrated authority and decision making in the Executive Director and his front office without sufficient checks and balances," the report said. The role of the UNDCP "as a centre of expertise could not be fulfilled without a free exchange of views, discussions and the involvement of staff in decision making."

The OIOS report included charges that the organization's lack of transparency destroyed employee morale; the postponement of conferences and meetings at the last moment increased programme costs; and new initiatives were undertaken without adequate planning, research and funding. As a result of the reports, UN Secretary-General Kofi Annan made it clear to Mr. Arlacchi that he should relinquish his post by mid 2002. His contract with the agency expires in February 2002.

Mr. Arlacchi's problematic leadership of the UNDCP came out in to the open when Michael von der Schulenburg, director of the operations and analysis division, resigned in December 2000. A confidential memorandum he had written to Mr. Arlacchi was leaked to the press. Von der Schulenberg said that the UNDCP under Arlacchi was "an organization that has increased its international visibility while at the same time, is crumbling under the weight of promises that it is unable to meet under a management style that has demoralized, intimidated and paralyzed its staff." Subsequently, several of the agency's top donors had either frozen their contributions or earmarked their money very explicitly to specific programmes.

According to Von der Schulenberg, Arlacchi tended to announce large programmes to fight drug production worldwide but forgot to secure donor commitments for funding, leaving a trail of quietly abandoned programmes. As a result, the long-term credibility of UNDCP was seriously undermined. Another ex-UNDCP official, former head of the drug law enforcement division Tony White, described the agency under Arlacchi as "an unhappy and fear-ridden organisation in which the worst of people get the best of most things." Access to Arlacchi was restricted to a relatively small number of trusted followers. Even some high level officials barely saw their director.

Mr. Arlacchi on several occasions had claimed success and victory, deliberately ignoring the facts. The latest example was the World Drug Report 2000. "Mr. Arlacchi was very concerned because the original draft did not reflect his vision of the world drug situation," said Francisco Thoumi, a highly regarded expert, who was asked by Arlacchi to finalize the report. "In particular, he argued that it was too pessimist and that it failed to show the great advances in the fight on drugs that had taken place recently. He frequently argued that the world drug problem was on the verge of being solved."

Arlacchi wanted to project his vision and provide a large number of facts and one-liners that the press could use. "These would make the title World Drug Report clearly a misnomer," Thoumi said. In the end Mr. Arlacchi simply eliminated sections that did not support his views and vision. For instance, a section of a chapter questioning the successes of alternative development that would have raised many doubts about the effectiveness of programmes in the decline of coca plantings in Bolivia and Peru - one of the success stories Arlacchi always stresses - was erased. Mr. Thoumi resigned and asked not to have his name associated with such an incomplete publication, fearing his professional reputation would suffer.

While the disastrous leadership of Mr. Arlacchi was widely reported, Arlacchi's negative legacy in international drug control has not been given proper attention. Just prior to his appointment as Executive Director in September 1997, attempts were made to re-assess current anti-drug policies and even to challenge the wisdom of the UN drug conventions framework. Mexico had called to convene an UN General Assembly Special Session (UNGASS) on drugs aimed to create a moment of global reflection, ten years after the adoption of the third UN anti-drugs convention, the Vienna Convention of 1988. Given the continuous rise in consumption and production of illegal drugs during the 1990s, it became clear that the drug control efforts of the last decades had largely failed.

For many, the time had come to re-assess. Others, however, concluded there was a need to re-affirm the agreed principles and apply current policies simply with more force to achieve real results. The two visions clashed during preparations for the June 1998 UNGASS on Drugs. A proposal to install an expert committee to undertake an independent evaluation of drug control efforts to facilitate a global and open reflection on 'new strategies' for the next decade, perished at the very first 'PrepCom' meeting in Vienna in March 1997.

Arlacchi, who became UNDCP Executive Director six months later, drew the UN agency into the 're-affirm' camp and guided UNGASS to its endorsement of deadline thinking and its re-affirmation of the current repressive multilateral policy framework. In just a few months Arlacchi ordered the UNDCP to prepare a strategy for the elimination of coca and opium poppy cultivation in ten years, in 2008. The plan called SCOPE (Strategy for Coca and Opium Poppy Elimination) was intended to be endorsed at the June 1998 UNGASS on Drugs. But scepticism of donor-countries and criticism from NGOs prevented SCOPE from being presented at the UNGASS meeting.

Nevertheless, SCOPE's basic principle - the elimination of coca and opium poppy within ten years - was more or less approved by the UN General Assembly in their political declaration. The UNDCP got a mandate 'to develop strategies with a view to eliminating or significantly reducing the illicit cultivation of the coca bush, the cannabis plant and the opium poppy by the year 2008'. Moreover, although SCOPE was not endorsed by the UN member states, it is clear that the strategy still functions as the guideline for most of the UNDCP programmes.

Arlacchi also embarked the UNDCP into highly questionable projects. In February 2000, TNI exposed UNDCP's support for research and development of biological herbicides to counter coca and opium poppy cultivation. In this controversial programme pathogenic fungi are developed for use in narcotics-producing areas globally, but especially Central Asia and South America. The agents are environmentally unsafe, and threaten to affect wild plants and agriculture in fragile and biodiverse ecosystems. These biological agents also endanger human health and threaten to undermine the global ban on biological weapons.

In Colombia the fungus project was stalled. Due to resistance from scientists, environmental groups, indigenous peoples and neighbouring governments, the Colombian government decided not allow intended field testing. However, in Central Asia the fungus is ready for use. Its deployment depends on the conclusions of a scientific review panel evaluating potential risks for the environment, legel crops and human health. Taking into account these conclusions, the project donors - the US and the United Kingdom - and the UNDCP will decide whether or not to give a go-ahead.

In the case of Afghanistan, UNDCP projects have been highly politicised and plagued by controversy, casting doubt about the ability of the agency to play a constructive role in the crucial political moment today. During the last decade UNDCP Alternative Development programmes have been largely unsuccessful. Mainly because the programmes disregarded the UNDCP's own evaluations and in-depth research in its planning and implementation. In the aftermath of war and the pending reconstruction of Afghanistan, understanding the illicit drugs economy as a cross-cutting issue affecting security and development is essential.

To address the endemic conflict inside Afghanistan, the severe social and development crisis and the refugee drama, policy making has to incorporate the drugs factor. However, the reconstruction of the country, the prevention of recurring armed conflict and the facilitation of the return of the displaced population, will have to be accompanied by considerate policy approaches towards the reality of a re-bound of the opium economy as a component of survival strategies.

Implementing unsound Alternative Development strategies as UNDCP has done for a decade in Afghanistan or forcing the new government to enforce the opium ban installed by the former Taleban regime under heavy UNDCP pressure, may well become obstacles to a sustainable solution of the crisis. The international community has to look beyond applying the blunt instrument of a conditionality principle, threatening - as UNDCP already started doing - the new government that reconstruction aid will be dependent on strong anti-drug measures.

Afghanistan should not become the victim of failing drug control policies worldwide. It would be a grave error to think that eliminating opium poppy cultivation in Afghanistan would solve the global heroin problem, while it would create destitution and stir up conflict in the country itself. Given the history of UNDCP's ill fated interventions in the region and the current malfunctioning of the agency in terms of management and evaluation mechanisms, it seems wise to consider an institutional UN framework for the reconstruction of Afghanistan without a leading role of UNDCP. A wider development and conflict resolution and prevention context will have to prevail, accompanied by drugs policy approaches based on learning from past failures.

In fact, five years have been lost under Mr. Arlacchi's leadership. Availability of drugs has not dropped and prices are lower than ever. While it is even more clear that current drug control strategies have failed, Mr. Arlacchi successfully countered any re-evaluation. As a result, the UNDCP nowadays is an agency out of touch with shifting opinions on international drug control, even as significant progress has been made in several, mostly European countries, to find an alternative along the lines of harm reduction policies - measures that reduce the harm drugs do, both to users and to society at large.

At the same time the 'war on drugs' in producer countries is escalating. Eradication strategies, especially in Colombia, have become increasingly militarized, and have led to human rights abuses and environmental degradation. Alternative development to substitute drug crops for legal agricultural products is in crisis, because it is subordinated to law enforcement focussing on forced eradication. In other words, it is time for a change. Hopefully, the world community will recognize that different drug control strategies are badly needed. Now that Mr. Arlacchi is out of the way, there is a new opportunity to appoint an UNDCP Executive Director who is open to evaluate and discuss alternatives to the current failure.

Within the Office of Drug Control and Crime Prevention (ODCCP) the UNDCP is to narrowly focused on drug law enforcement. Health and development - issues that are essential aspects of drug control policy - have been made subordinate to law enforcement goals. Cooperation with other UN agencies like the World Health Organisation (WHO) and the UN Development Programme (UNDP) is insufficient. This results in conflicting views and policies on the drug issue within the UN community. The new executive director's main task would be to guide a process of internal reform that the UNDCP has to undergo and open up to challenging views outside the agency.