IDPC response to the INCB Annual Report for 2016 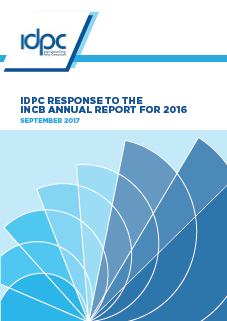 The International Narcotics Control Board (INCB) Annual Report for 2016 is, as usual, a mixed bag of high quality data and sometimes doubtful political views. It is the final Report of the Presidency of Mr. Werner Sipp, and as such represents a comparatively progressive text, in contrast to many previous Reports. Despite this, the general – if ambivalent – acceptance of medical uses of internationally controlled drugs is contrasted by the Board’s continuing defence of the conventions in their current form and their opposition to any non-medical use. As evidenced within the Report for 2016, it seems certain that in this post-UNGASS/pre-2019 period, one of the Board’s key predicaments will be how to deal with the issue of regulated markets for the recreational use of cannabis and their operation beyond the confines of the current treaty framework.