How does the agreement on drugs between the government and the FARC help to put an end to the armed conflict in Colombia? 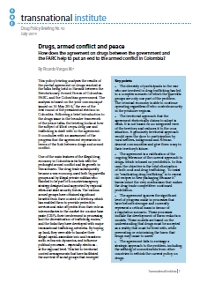 This policy briefing analyses the results of the partial agreement on drugs reached at the talks being held in Havana between the Revolutionary Armed Forces of Colombia, FARC, and the Colombian government. The analysis is based on the joint communiqué issued on 16 May 2014, the eve of the first round of the presidential election in Colombia. Following a brief introduction to the drugs issue in the broader framework of the peace talks, the briefing looks at how the subject of illicit crops, drug use and trafficking is dealt with in the agreement. It concludes with an assessment of the progress that the agreement represents in terms of the link between drugs and armed conflict.

• The diversity of participants in the war who are involved in drug trafficking has led to a complex scenario in which the guerrilla groups are only one part of the problem. The criminal economy is able to continue operating regardless of who controls security in the producer regions.

• The territorial approach that the agreement rhetorically claims to adopt is weak. It is not based on an integrated view of the territory and reduces it to the coca situation. A genuinely territorial approach would open the door to participation by rural settlers, indigenous and African-descent communities and give them a say in their territory’s future.

• The agreement is a ratification of the ongoing relevance of the current approach to drugs, which is based on prohibition. In this case, the objective is the total elimination of both coca and drug trafficking. To insist on "eradicating drug trafficking" is to repeat old recipes in new packaging because it leaves intact the very mechanism that makes the drug trade competitive: continued prohibition.

• The agreement ignores the significant level of progress made in processes that have become stronger and currently represent a critical mass in favour of a regulation scenario. These processes include the development of harm reduction models. These models are based on the understanding that drugs must be accepted as a reality that must be lived with, while preventing or minimising the harm that drugs may cause to users.

• The agreement fails to envisage a strategic approach to the problem, including the seeking of commitments from other countries to rethink the current policy on drugs.