The United Nations and Harm Reduction 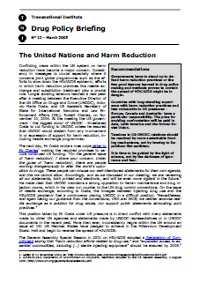 In March 2005 the UN Commission on Narcotic Drugs (CND) will meet in Vienna. The confrontation between zero-tolerance ideologists and harm reduction pragmatists will be fiercer than ever before. The US government – the biggest donor of UNODC – threatened to cut funding to UNODC unless the agency assured that it would abstain from any support for harm reduction, including needle exchange programmes and substitution treatment. Conflicting views within the UN system on harm reduction have become a major concern. Consistency in messages is crucial especially where it concerns joint global programmes such as the efforts to slow down the HIV/AIDS epidemic.

Conflicting views within the UN system on harm reduction have become a major concern. Consistency in messages is crucial especially where it concerns joint global programmes such as the efforts to slow down the HIV/AIDS epidemic; efforts in which harm reduction practices like needle exchange and substitution treatment play a pivotal role.

Longer existing tensions reached a new peak after a meeting between the Executive Director of the UN Office on Drugs and Crime (UNODC), Antonio Maria Costa, and US Assistant Secretary of State for International Narcotics and Law Enforcement Affairs (INL), Robert Charles, on November 10, 2004. At the meeting the US government - the biggest donor of UNODC - threatened Costa to cut funding to UNODC unless he assured that UNODC would abstain from any involvement in or expression of support for harm reduction, including needle exchange programmes.

The next day, Mr Costa wrote a mea culpa letter to Mr Charles making the required promises to secure continued US funding. "On the general issue of 'harm reduction', I share your concern. Under the guise of 'harm reduction', there are people working disingenuously to alter the world's opposition to drugs. These people can misuse our well-intentioned statements for their own agenda, and this we cannot allow. Accordingly, and as we discussed in our meeting, we are reviewing all our statements, both printed and electronic, and will be even more vigilant in the future."

He made clear that UNODC maintains a strong opposition to heroin maintenance and drug injection rooms, which in his view run counter to the UN drug control conventions. On the issue of needle exchange, according to Costa, the linkages between injecting drug use and the HIV/AIDS pandemic fuel a controversy placing UNODC in a difficult position. "Nevertheless, and again taking our guidance from the conventions, CND and INCB, we neither endorse needle exchange as a solution for drug abuse, nor support public statements advocating such practices."

This position taken by Mr Costa under US pressure is in direct conflict with many statements made by other UN agencies and statements made by UNODC representatives or in UNODC documents in the recent past. More than ever, inconsistency reigns within the UN around an issue all 191 UN Member States have pledged to achieve in the Millennium Development Goals: Halt and begin to reverse the spread of HIV/AIDS.